She was the best outgoing student with 9 Gold medals during MBBS and underwent postgraduate training in Chennai. With specialist training in Infertility and minimal access surgeryat Leeds in UK, she has expertise in Reproductive Medicine, Ambulatory Gynaecological Surgery, advanced laparoscopy, vaginal surgery and pelvic ultrasound scanning. She has given international media interviews and has several publications in peer reviewed journals to her credit. 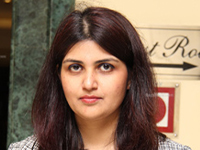 Gorthi S, Tang T, Balen AH. “Influence of the first IVF cycle on the results of the second cycle and the effect of embryos frozen on cycle outcome – Fertility and sterility F and S10557 – 2009

MON – SAT 10AM TO 5 PM
timings may vary, if any procedures or surgeries scheduled